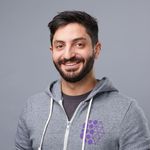 John Conway, a British mathematician, discovered a beautifully simple phenomenon he dubbed the game of life. Long story short, given a grid of live or dead cells, and with a sprinkle of simple rules, “life-like” kind of structures emerge over time. It’s one example of something called cellular automatons, which themselves might warrant their own blog post (hint to future me…).

Implementing the game of Life isn’t difficult, it’s just a few rules that you have to respect, namely:

The only thing left is to find the right starting point. I guess you see where this is going…

QR codes are everywhere these days. At restaurants, on boarding passes, on billboards, even on vaccine passports. These are all binary maps full of entropy gifted to us by the universe, so let’s put them to good use and use them in our game of life.

To fetch our QR code, we use requests and PIL to load the image. We then binarize it by thresholding using the mean grayscale value. This is a gross approximation - we are not replicating 1:1 the binary map, we’re just using an approximation that’s good enough to play the game.

Implementing the game of Life

We need to count the number of live and dead neighbours at each generation and then implement our rules. Instead of doing nested for loops and dealing with edge cases, we’ll simply using a convolution between the current game state and this kernel:

This is done in the count_neighbors method of the game:

We are setting a zero padding boundary with the fill and fillvalue parameters, and the same means our output is the same dimension as our input. Pretty neat trick to count neighbours, right?

Next, to change values to dead or alive, we apply our rules and update our grid:

All of the methods are wrapped in a class for convenience.

Putting it all together

In the colab, we can set the length of the game to be as long as we want using the n_steps parameter. Let’s see the evolution of our QR code over a longer period of time:

All the code to reproduce this is on Colab:

You May Also Enjoy

Teaching ChatGPT about the birds and the bees